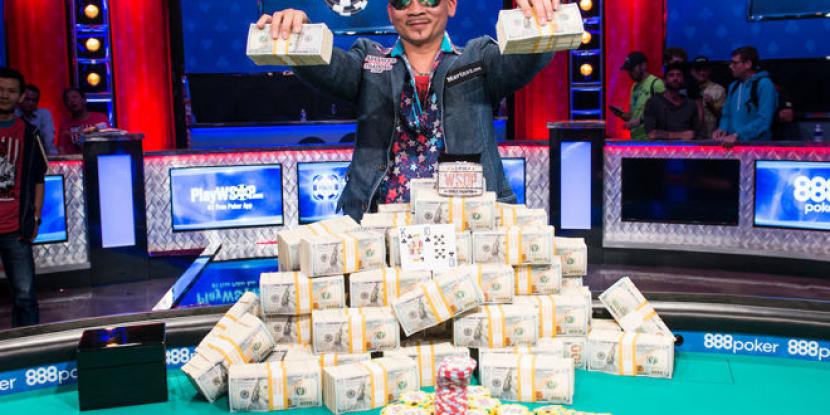 Qui Nguyen is World Champion for 2016

More than 6,000 players sat down to play this summer at the Main Event of the World Series of Poker championships, collectively amassing $63 million in the prize pool. Most of this sum has already been claimed, however a large share was yet to be won by the members of the November Nine, who had all qualified to the final of the illustrious tournament series table in Vegas.

The Nine had plenty of time to prepare their game and psyche for the ultimate finals, safe in the knowledge that even last place at the finals would win them a mimimum of $1 million. However, the champion would take home eight times this amount, $8 million, along with the title of world champion, so the game was the chance of a lifetime for all participants.

Someone had to be the first to leave, an honor that went to Fernando Pons from Spain, and another five players followed suit, leaving only three to fight for the throne and the title on the final day, all of them Americans.

Even though he has been playing since 2003, it would be a far fetch to call the Vietnamese-American Qui Nguyen a seasoned pro, as he has only won 50,000 dollars in 13 years. This has all changed this year when he made the November Nine with a guaranteed $1 million share of the prize pool. And when something good begins, there is no stoppping... Nguyen made the final day of the event, along with only two contenders, then went for gold in the heads-up stage, against a more experienced player in the person of Gordon Vayo, pushing in his pre-flop all-in for the final hand of the game, afer 8 hours of grueling back and forth.

The community cards saw Nguyen ahead with a pair of Kings, however only an eight or a Queen separated Vayo from a straight. The ♠2 on the turn didn't help either player, just raised the suspense for the final card on the river, making both aces grin uncomfortably. The last card was the ♥3, which handed Nguyen the title of WSOP champion and his well-deserved win of $8 million.